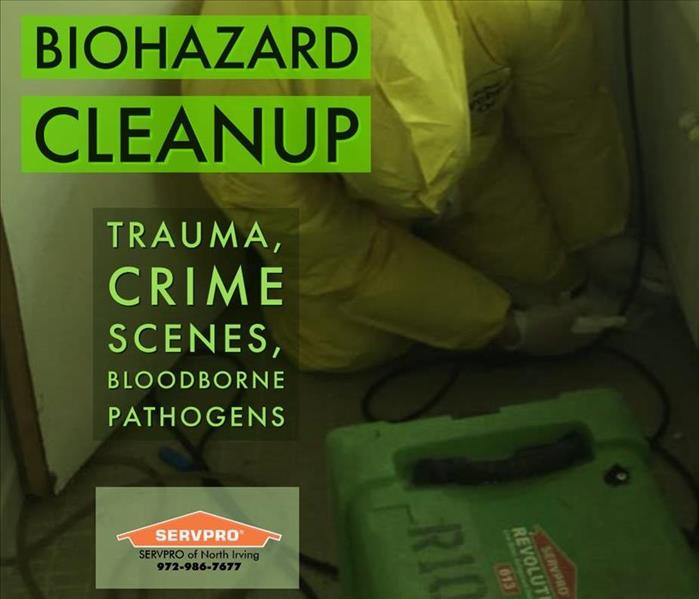 Our SERVPRO Location is a Dallas based biohazard cleaning company. We have serviced DFW since 1986.

What is a biohazard cleanup?

Biohazard cleanup is a term used to cover a wide range of cleaning that is related to biological fluids and materials.  There are a number of causes that could warrant a biohazard cleanup, otherwise known as biohazard remediation. Accidental death, unattended death, suicide, and crime scene cleanup are the most frequent causes that require biohazard cleaning.  However, there is really no limit to the potential causes that may require a professional biohazard company to perform bioremediation work.

An easier way to approach the question is to take into consideration what needs to be cleaned.  Any biological fluid (anything originating from within a human), including blood, feces, vomit, and more, are all potentially harmful if not properly disposed of.  Common incidents that require biohazard cleanup involve death.

Due to the nature of potential health hazards because of exposure to biological fluids, the cleanup process is thorough and extensive.  Our trained technicians are equipped with proper Personal Protective Equipment and specialized tools to clean any biohazardous material properly and safely.

The nature and extent of the cleaning will determine the necessary steps in biohazard cleanup.

When should I call a biohazard cleaning company?

The affected area in a biohazard cleanup needs to be treated as soon as possible. Understandably, in the case of unattended deaths, this may not occur.  In many other situations, it is important to call SERVPRO of North Irving and set up a time for cleaning.

There are a number of reasons you should call quickly.  As biological fluids deteriorate on surfaces in your home or business, they begin to let off an odor that can quickly transform the area uninhabitable.  Biological fluids, such as blood, easily seep through cracks and holes.  This makes the remediation work more difficult by the day. What one might consider a small issue can quickly turn into an odor that renders the area unlivable.  The longer an odor lingers in the affected area, the more drastic measures will be needed to properly complete the bioremediation.

If you find yourself asking when you should call about biohazard cleanup, the answer is probably right now.

Why do I need a professional to handle Dallas biohazard cleanup and biohazard waste?

The longer it takes to get a biohazard cleaned, the more risk there is to anyone in contact with the site of bloodborne pathogens.  Biohazard risks are a major concern and the reason that remediation has to be done properly and professionally.  In this case, out of sight, out of mind isn't safe.  One cannot simply wipe or hose off the affected area and expect the issue to be resolved.  In fact, bloodborne pathogens are more hazardous than you would expect.  Every 1 in 24 Americans have HIV, Hepatitis B, or Hepatitis C.  These diseases, and the risk of exposure, cannot be taken lightly.

These bloodborne pathogens can survive up to 16 days after the death, meaning the risk continues long after the incident that necessitates a biohazard cleanup.  Because of such serious risks, our crews follow all safety protocols and contain, sanitize, and decontaminate all affected and potentially affected areas.

Our teams use specialized disinfectants and sanitizers to guarantee a safe environment after cleaning.  Some materials and items are not safe to remain in the residence or building.  These biohazardous waste items need to be properly disposed of in biohazard disposal bags.  These bags are then boxed and taken for proper medical incineration disposal.  Disposal of this material is required by law and is one of many reasons you need a professional to handle your biohazardous needs.

There are plenty of cleaning crews that might say they can take care of your bioremediation needs, but all cleaning should be handled by experienced crews.

We Are Here to Help With Any Dallas Biohazard Cleanups

When it comes to choosing the right people for your Dallas biohazard cleanup, there are a few things to consider.  You want a company with experienced biohazard cleaning certified technicians.  Our franchise has serviced Dallas for over 30 years, and we have technicians ready to help.  We have completed biohazard cleaning for all kinds of situations including crime scenes, trauma, and suicide cleanup.

With partnerships around Dallas for safe disposal of biohazardous waste, our team at SERVPRO has the knowledge, experience, and resources to make your biohazard situation, “Like like it never even happened.”

We understand that these calls are often the result of life-changing events, like and untimely deaths. Our staff is professional, patient, and empathetic towards your needs.

We know biohazard cleaning situations aren’t easy, and we are here to help.